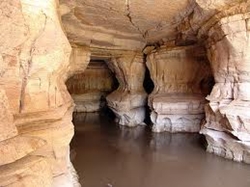 Not far from Bale Mountains is one of the world's most spectacular and extensive underground caverns: the Sof Omar cave system. The weib river, which sources from the Bale Mountains National Park, penetrates the caves year round, offering a magnificent view to the visitors. Sof Omar is an extraordinary natural phenomenon of breathtaking beauty. At 15.1 kilometres long, Sof Omar Cave is the longest cave in Ethiopia and the largest system of caves in Africa, through which the Weib River flows. 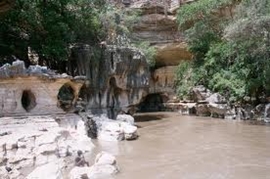 It is said that Allah revealed the opening to this limestone cave system to Sheikh Sof Omar in the 12th century. The sheikh and his followers used the caves as a mosque, a purpose to which the caves were well suited as they had been eroded into columns, buttresses, domes, vaults, and pillars - a natural architectural marvel still used as a gathering place by local Muslims.

The First religions in this part of Africa were essentially spirit worship and ghost cults in which the most powerful supernatural beings were believed to attach themselves to trees, rocks, and - most forcefully - to caves, which became shrines for prayer and sacrifice. Even today, the visitor to Sof Omar can see many signs of the persistence of such pagan beliefs and practices: a group of men sacrificing a goal; tokens of leather and cloth hung from rocky projections in the cave. 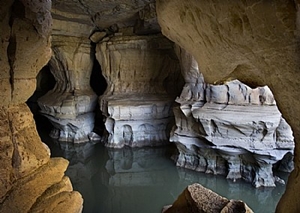 You approach the Sof Omar caves through the tiny village of Sof Omar, perched on the cliffs above the Web River. To the rear of the village is a dark, gaping crevice down which a precipitous narrow footpath winds to the first cave’s floor. Only a few patches of sunlight filter into this dimly lit kingdom, which extends in all directions through vast subterranean passageways of polished white limestone, carved by the river's flood and recess over countless ages.

In this realm of dry, cool caves nature has worked a marvel of architecture - soaring pillars of stone twenty metres (66 feet) high, flying buttresses, fluted archways, and tall airy vaults. Finally, the river itself is reached, a sunless sea flowing through a deep gorge. Standing on a balcony near the roof, one has a spectacular view of the river rushing below. Sof Omar's large central hall, the 'Chamber of Columns' - so named after the colossal limestone pillars that are its dominant feature - is one of the highlights of the cave system. At another part of the network there is a small gap in the rocks through which the river passes, about two and a half metres (eight feet) wide, where a bridge can be made with driftwood to go across. The most direct route through the caves passes these and many other remarkable sights, and takes about an hour at a good walking pace. 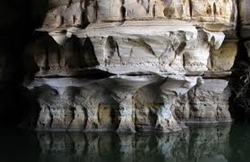 Inside the Sof Omar caves, the only living creatures arc bats and fish. Crocodile are to be found in the river nearby but, fortunately, seem to shun the caves themselves. The countryside abounds with wildlife - dik-dik and kudu, serval cat, rock hyrax, giant tortoises, snakes, and lizards, as well as more than fifty species of birds.