Now we have our own Ethiopian Social Networking Platform.
Check it out and tell us how to make it better.
Map Loading ... 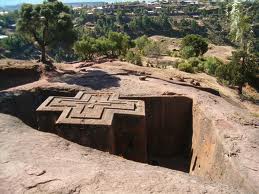 Lalibela is one of Ethiopia's holiest places, dating back to the 12th century. Lalibela town, formerly known as Roha, named after one of Ethiopian ruler, King Lalibela (1181-1221), a member of the Zagwe dynasty. Lalibela is known by the amazing eleven churches hewn from solid rock. Built in the twelfth century, they are still standing in excellent condition. Most consider them as the eighth wonder of the world, and is one of the world heritage sites listed by UNESCO.

The famous Lalibela churches carved out from the rock on which they stand. Some lie almost completely hidden in deep trenches, while others stand in open quarried caves. A complex and amazing labyrinth of tunnels and narrow passage ways connects them all.

Seeing all of the Lalibela churches are well worth it - particularly during the colourful Ethiopian christian holidays: Genna, Ethiopian Christmas (on January 7th) and Timkat, Epiphany (on January 19th). 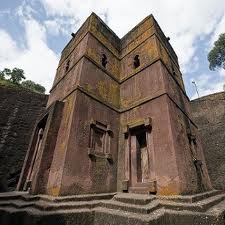 Lalibela is located in northern Ethiopia, about 500 miles [800 kilometers] north of Addis Ababa and halfway up on Roha Mountain. Legend has it that one day Lalibela's mother saw him lying happily in his cradle surrounded by a dense swarm of bees. Believing the bees had the power to tell the future, she called her son 'Lalibela', which means in the Agaw language means, 'the bee recognizes his power to rule'.

Lalibela's older brother, Harbay, the incumbent monarch, was naturally disturbed to hear this news and unsuccessfully tried to have his brother murdered. Persecution continued for several years, culminating in a deadly poison that left the young prince into a three-day coma . During the three-day stupor, Lalibela was transported by angels to heaven, where God ordered him to return to Roha and build churches the like of which the world had never seen before. After Lalibela woke up from the comma and was crowned as a king, he gathered local handymen and started building the churches.

Another legend says that Lalibela has visited Jerusalem and vowed to build a new Jerusalem as his capital in response to the capture of old Jerusalem by Muslims in 1187.The rock churches, although connected to one another by maze-like tunnels, are physically separated by a small river which is called the Jordan. Churches on one side of the Jordan represent the earthly Jerusalem; whereas those on the other side represent the heavenly Jerusalem, the city of jewels and golden sidewalks alluded to in the Bible.

LALIBELA - the History Behind the Rock Churches of Ethiopia

Watch the history of Lalibela as presented by a CNN Perspective Series - Millennium, The 12th Century.

Watch the history of Lalibela in Amharic.

The churches are carved from soft volcanic rock, some cut into the face of a cliff, while others are isolated structures in deeply carved pits with long access passages or trenches. The earliest carved monuments may not have been churches, but in the 10th and 11th centuries AD sophisticated churches of diverse styles were created, with architectural features that scholars believe originated in ancient Aksum, which flourished up to 800 years previously. The finest examples are three-aisle or five-aisle basilicas, carved inside and out, with window openings as well as detailed geometric ornamentation.

King Lalibela oversaw the final extension of the church complex. This may have been to create an Ethiopian place of pilgrimage as an alternative to Jerusalem, which had been captured early in King Lalibela's reign by the Muslim Salah-ad-Din (known in the West as Saladin). This is reflected in local place names such as the "Church of Golgotha" (now containing the purported tomb of King Lalibela), "Yordanos" (Jordan) for the seasonal river that runs through the complex, and a nearby hill called "Debra Zeit" (meaning Mount of Olives).

The most famous of the churches at Lalibela is "Beta Giyorgis" (The House of Saint George). It is not part of an interconnected complex, but stands on its own on a plinth in a rectangular pit 11 metres deep, with a 30 metre long approach trench. It has blind lower windows, in an Aksumite style, with higher open windows central to each face when viewed from the outside. 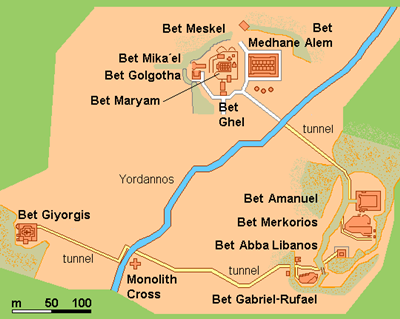 (Church of Abba Libanos) This rectangular church is in the eastern part of the complex, and is carved on all four sides, but is continuous with the rock above it. It is linked to a structure known as Bet Lehem.

(Church of the Virgins)This church is carved into the south wall of the courtyard of Bet Maryam. It is the most roughly hewn of the Lalibela churches.

(Church of Saint Emmanuel) This church is in the eastern part of the complex. It is linked to the courtyard of Bet Mekorios by a 35 metre long tunnel and has the most intricate external ornamentation. Bet Emanuel is perhaps the finest; its elaborate exterior much praised by art historians. The structure contains a large hall with four pillars, and its irregularly placed windows arc Axumite in style, as are the walls. A spiral staircase leads up to an upper storey. The most striking interior feature is the double frieze of blind windows in the vaulted nave, the lower frieze being purely ornamental and the upper consisting of windows (to provide light from the galleries) alternating with decorated areas.

Chambers and cavities for sacred bees in the outer wall of the courtyard are a reminder of the bees that prophesied kingship to Lalibela. Some of the chambers, however, are the graves of monks and pilgrims who wanted to be buried in this 'holy city'.

(Church of Saints Gabriel and Raphael) This church is in the eastern part of the complex, and has a courtyard extending its north and south walls.

(Church of Saint George) North of the Jordan river, but much further to the west, and somewhat isolated from the others, is the remarkable church of Bet Giyorgis, possibly the most elegant of all the Lalibela structures, located in the south-west of the village on a sloping rock terrace. In a deep pit with perpendicular walls, it can only be reached through a tunnel entered a distance away through a trench. Small round caves and chambers have been found in the courtyard walls — graves for pious pilgrims and monks.This famous church stands alone in the southwest. Dating to the early 13th century AD, it is the most recently built of the Lalibela churches.

Standing on a three-tiered plinth, Bet Giyorgis is shaped like a Greek cross and has walls — with an alternation of projecting and recessing horizontal layers — reminiscent of Axumite archi¬tecture. The church also has an elaborately shaped doorway.

(Church of Golgotha and Sain Mikael) The interconnected churches of Bet Golgotha and Bet Mika'el form the most mysterious complex in Lalibela. Its holiest shrine — the Selassie Chapel — is housed here, and, according to the whispers of the priests, perhaps even the tomb of King Lalibela himself. Some of the most beautiful processional crosses of Lalibela are here. One, a very rich and elaborate metal cross, black with age and decorated with inlaid circles, is said to have belonged to Lalibela. It contains larger than life bold-relief figures identified as Saint John, Saint Stephen, Saint George and Saint Kirkos, as well as the purported tomb of King Lalibela.

(Church of the World Saviour) This church is in the northern part of the complex, and perhaps the oldest of the Lalibela churches. Bet Medhane Alem is the largest of all the Lalibela churches. Built like a Greek temple, it is unusual, being entirely sur¬rounded by square columns, with a further forest of twenty-eight massive rectangular columns supporting the roof inside. Polished by centuries of pressure from countless feet, the stone floor reflects shafts of light from apertures in the walls high above. In a corner, one can see three empty graves said to have been symbolically dug for biblical patriarchs Abraham, Isaac, and Jacob.

(Church of the Cross) This is a grotto church, partially carved out of the rock, and whose façade is level with the north wall of the courtyard of Bet Maryam.

(Church of Saint Mercurios) This is a partial grotto church in the eastern part of the complex, with eight roughly hewn pillars in its façade.

(Church of Mary) This rectangular church is the most ornate of the Lalibela churches and is surrounded by a trapezoidal courtyard.

This is a small, rough, trapezoidal structure in the western part of the complex, related to the Bet Golgotha complex.