Danakil Depression - The Lowest and Inhospitable Place on Earth

In the Afar region of northern Ethiopia, lies a vast, tortured, desert plain called the Danakil Depression. Danakil lies about 410 ft (125 m) below sea level, and is one of the hottest and most inhospitable places on Earth. It is the hottest place on Earth in terms of year-round average temperatures - temperatures average 94 degrees Fahrenheit (34.5 Celsius) but have been recorded above 122 Fahrenheit (50 Celsius). Numerous sulfur springs, volcanoes, geysers, acidic pools, vast salt pans, and colorful mineral-laden lakes dot the area, which formed above the divergence of three tectonic plates. Volcanic activity heats spring water, bringing sulfur and iron to the surface, leaving behind yellow, green, and orange deposits. For centuries, locals have been trekking in with camel caravans to mine the salt by hand, and in recent years, a few have been guiding tourists into the alien-looking landscape. 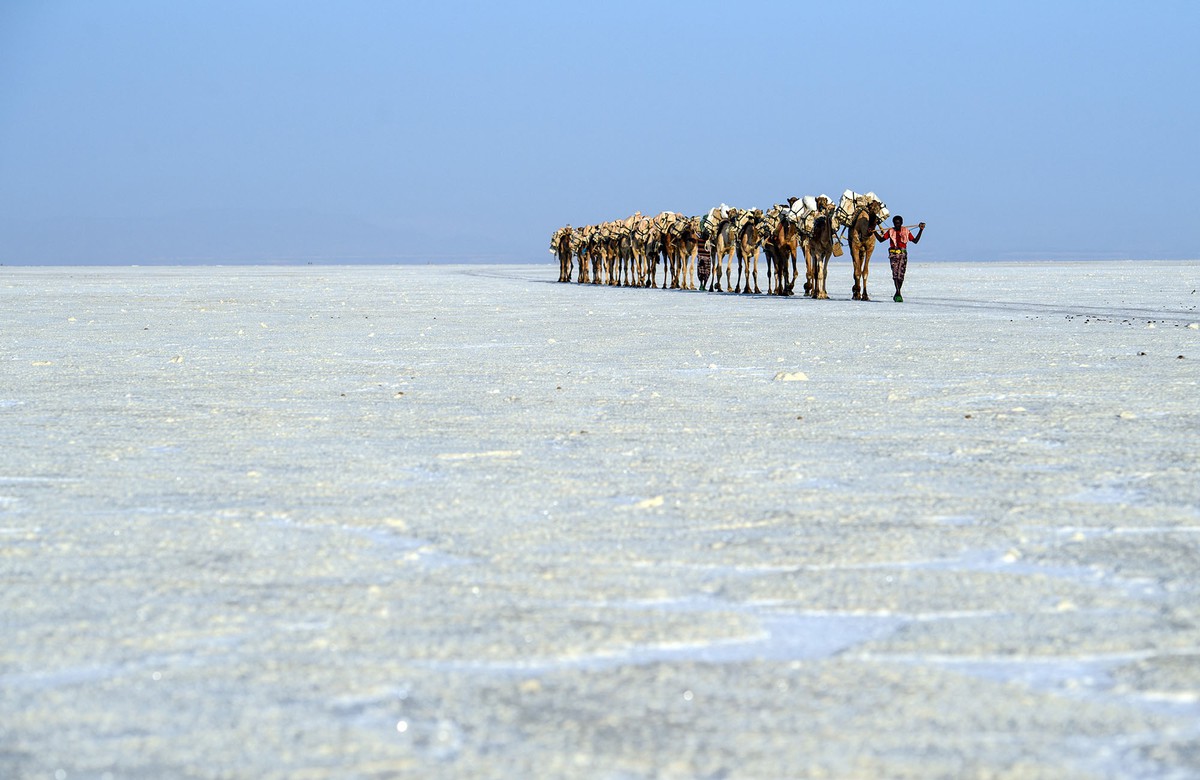 The Danakil Depression lies at the triple junction of three tectonic plates and has a complex geological history. It has developed as a result of Africa and Asia moving apart, causing rifting and volcanic activity. Erosion, inundation by the sea, the rising and falling of the ground have all played their part in the formation of this depression. Sedimentary rocks such as sandstone and limestone are unconformably overlain by basalt which resulted from extensive lava flows.

There are two active volcanos within Danakil Depression. Mount Ayalu is the westernmost and older of the two volcanoes at the southern end of the Danakil Depression. The other active volcano, Erta Ale, is one of several crater lakes of lava bubbling from the Earth's mantle. Additionally, the area contains the Dallol sulfur springs, or hot springs.

Erta Ale is centered over the East African Rift system, which is a triple junction setting whose movements are resulting in the formation of a pull-apart basin or rift. The volcano comprises mainly mafic material which has been brought up to the surface caused by unroofing of the mantle due to this rift formation. 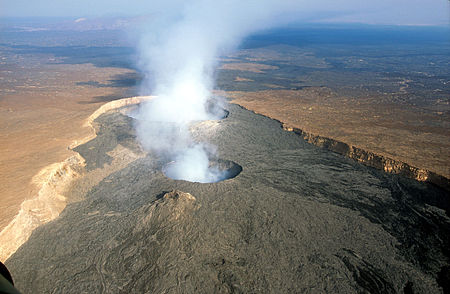 Erta Ale is 613 metres (2,011 ft) high, with one or sometimes two active lava lakes at the summit which occasionally overflow on the south side of the volcano.[1] It is notable for holding the longest-existing lava lake, present since the early years of the twentieth century (1906). Volcanoes with lava lakes are very rare: there are only eight in the world. 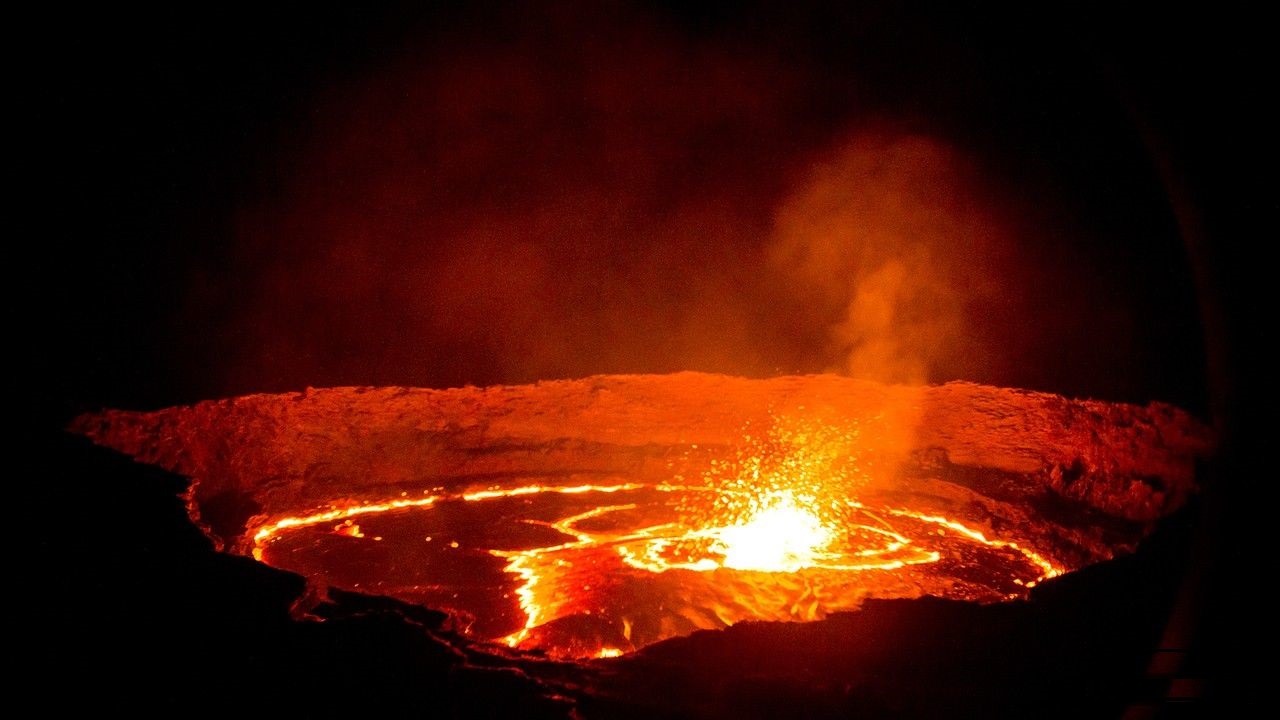 There was a major eruption on 25 September 2005 which killed 250 head of livestock and forced thousands of nearby residents to flee. There was further lava flow in August 2007, forcing the evacuation of hundreds and leaving two missing. An eruption on 4 November 2008 was reported by scientists at Addis Ababa University. Another eruption was reported in January 2017.

Salt miners ply an ancient and gruelling trade in Ethiopia's northeastern Danakil Depression, one of the hottest and lowest places on Earth. Danakil contains vast salt flats as well as sulphur springs and rumbling volcanoes created by the grinding of three tectonic plates. Yet this inhospitable landscape manages to support the Afar people, a Muslim group straddling the borderlands of Ethiopia, Eritrea, and Djibouti. 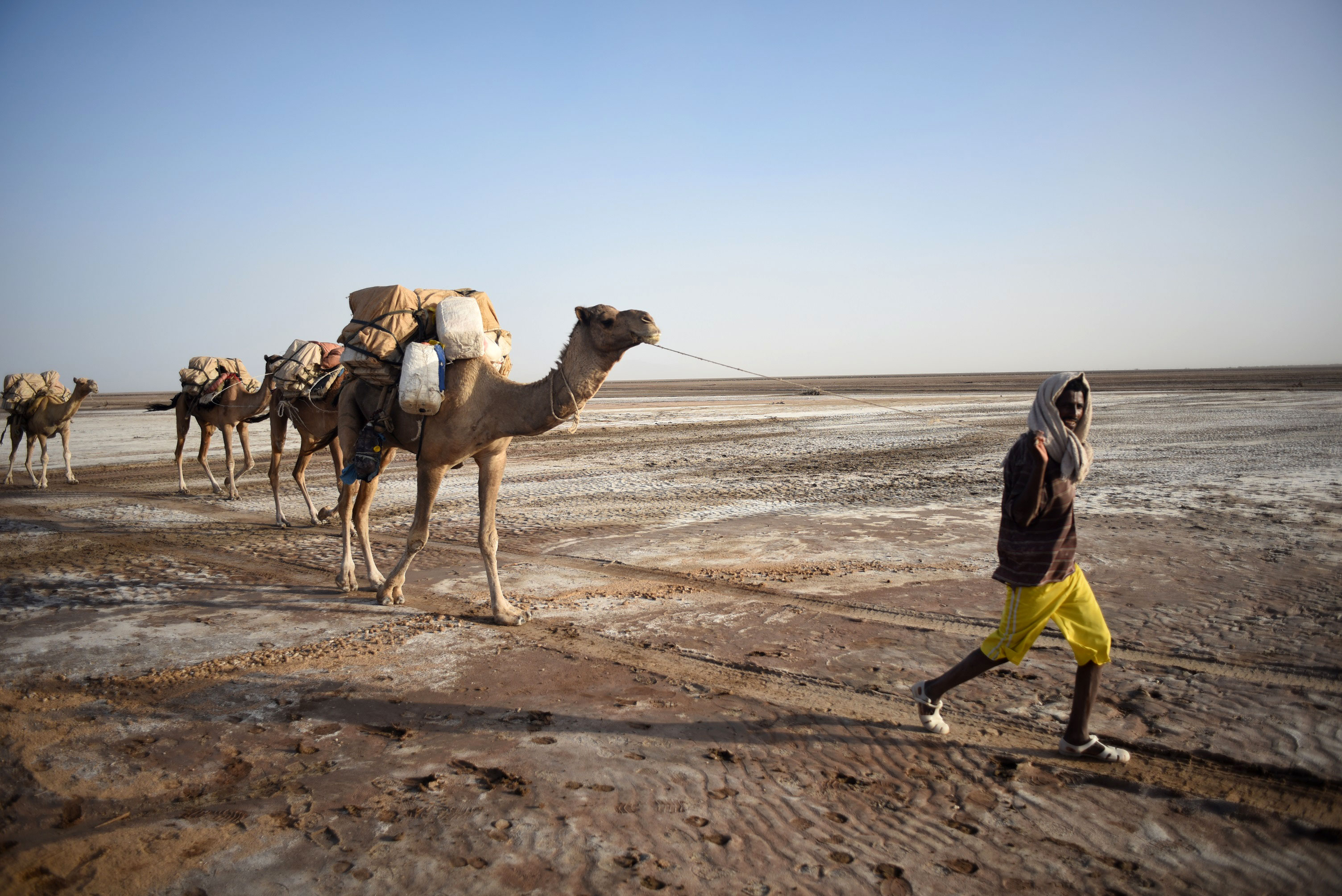 Each day, Afar miners chop salt from the earth under a blistering sun, then load the minerals on to camels and donkeys which march for days to market towns to the west where the mineral is sold.

Danakil salt was once so valuable people used it as currency, but each rough hewn slab fetches only four Ethiopian birr (about 20 cents) at the mine today. With such small profits for such hard labour, the ancient trade may soon give way to more lucrative pursuits.

The Danakil also holds large deposits of potash which is used in fertilisers, and numerous mining companies are lining up to begin extraction.

A railway being built from Djibouti and a new tarmacked road traversing the old salt route may soon render the traditional camel caravan obsolete. Until then, the Afar miners will continue their tough way of life, scratching a living from this desolate stretch of salt.