Join me at MyPlace - Invite Your Friends to Join
Now we have our own Ethiopian Social Networking Platform. 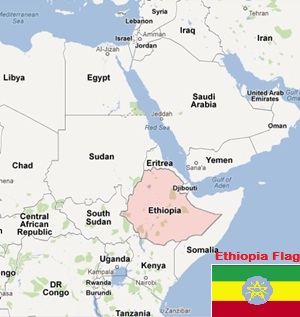 Ethiopia, historically also known as Abyssinia, is Africa's oldest independent country and its second largest in terms of population. It served as a symbol of African independence throughout the colonial period, and was a founder member of the United Nations and the African base for many international organisations.Ethiopia has as many as 80 ethinic groups, each with its own language.

Ethiopia capital city, Addis Ababa, is the home of the African Union (AU), the headquarters of the United Nations Economic Commission for Africa (UNECA), and numerous other continental and international organizations. Addis Ababa is therefore often referred to as "the political capital of Africa", due to its historical, diplomatic and political significance for the continent. The Federation of African Societies of Chemistry (FASC) and Horn of Africa Press Institute (HAPI) are also headquartered in Addis Ababa.

The national language, Amharic – Africa's only written language with its own uniquie script – is widely spoken throughout the country and is predominant in most of the big cities.

Ethiopian flag consists of three equal horizontal bands of green (top), yellow, and red. The three main colors of Ethiopia flag (adopted ca. 1895) were so often adopted by other African countries upon independence that they became known as the Pan-African colors; the emblem in the center of the current flag was added in 1996. 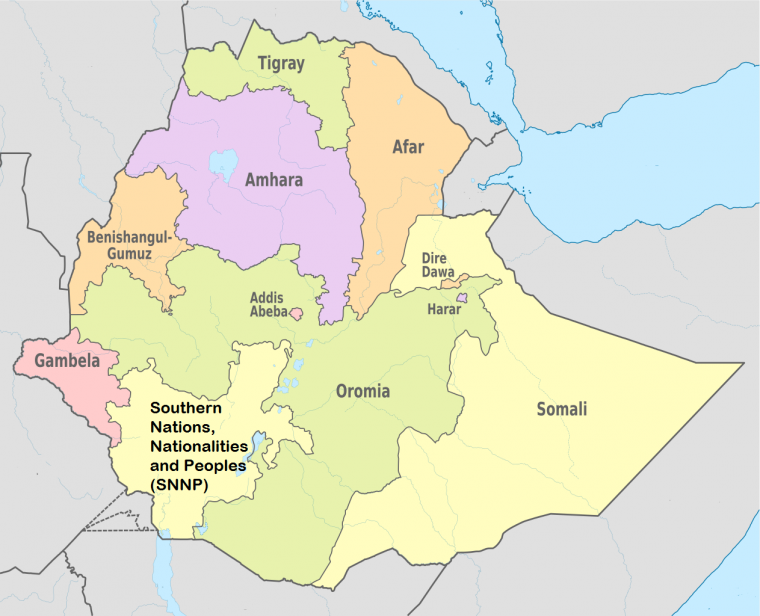 Historical and Most Visited Cities

Addis Ababa - capital of Ethiopia and one of the biggest shopping cities in Africa.
Adama - a popular weekend destination near Addis; also known as Nazret or Nazareth.
Aksum or Axum - home of ancient tombs and stelae fields, in the far north near Eritrea.
Bahir Dar - the monasteries on the islands of Lake Tana and close to the beautiful Blue Nile Falls.
Dire Dawa - the second largest city.
Gondar - the ancient capital of Ethiopia and home to the country's emperors during the 17th and 18th centuries.
Harar - ancient walled city near. Dire Dawa
Lalibela - home to 11 astonishing rock-hewn churches.
Mekele - a town in the Tigrayan Highlands in the north.

The following are the top largest cities in the country based on the 2013 population estimate. The city, region and population number are listed.

The History of Ethiopia - Documentary

Watch the history of Ethiopia - Lost Kingdom of Africa, as presented in BBC.

Ethiopia is the land of numerous tourist attractions. It has nine UNESCO inscribed World Heritage sites and has some of the most spectacular scenery in Africa. It is rich in cultural and historical importance, has an amazing diversity of birds and mammals. Top tourist activities include bird and wildlife watching, admire some of Ethiopia's landmark sights such as Axum, Lalibela, the Blue Nile Falls, Lake Tana (source of the Blue Nile), castles of Gondar, the spectacular Simien Mountains, Awash National Park, and the Great Rift Valley - known for the many lakes and exciting wildlife refuge.

Ethiopia has 9 national parks. The protective parks are complemented with about 100 other national protective areas with different protective status. The Simien-national park belongs to the world nature heir of UNESCO. 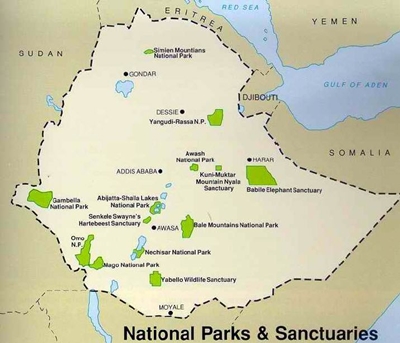 Ethiopian climate varies according to the different geographical regions. The central plateau, lie between 1,800 m (6,000 ft) and 2,500 m (8,200 ft) above sea level, covers the large part of the country. Most of the country's major cities and tourist sites are located at this elevation, including historic capitals such as Gondar and Axum.The typical climate in this region is very mild, with temperatures on the most of the highlands averaging below 27°C (80°F). The average minimum during the coldest season is 5.5°C (42°F), while the average maximum rarely exceeds 27°C (80°F). Heavy rainfall occurs in most of the country during June, July, and August. Directly after the rains the highlands are wonderfully green, covered with wildflowers and sublime for trekking.

The modern capital Addis Ababa is situated on the foothills of Mount Entoto at an elevation of around 2,400 m (7,874 ft), and experiences a pleasant climate year round. With fairly moderate climate with minimal seasonal temperature variation. Addis Ababa has a dry season from October - February, a light rainy season from March - May, and a heavy rainy season from June - September. The dry season is the sunniest time of the year, though even at the height of the rainy season in July and August there are still usually several hours per day of bright sunshine. The average annual temperature in Addis Ababa is 16 °C (61 °F), with daily maximum temperatures averaging 20°C - 25 °C (68 °F to 77 °F) throughout the year, and overnight lows averaging 5°C - 10 °C (41°F - 50 °F).

In low the lowland fringes of western, eastern and southern Ethiopia, the climate can be significantly hotter and drier. Temperature variations in the lowlands are much greater, and the heat in the desert and the low lying Ethiopian grasslands and shrublands is extreme, with occasional highs of 50° C (122° F ). Dallol, 120 metres below sea level in the harsh salt flats of the Danakil depression, has the world's highest average annual temperature of 34 °C (93 °F).